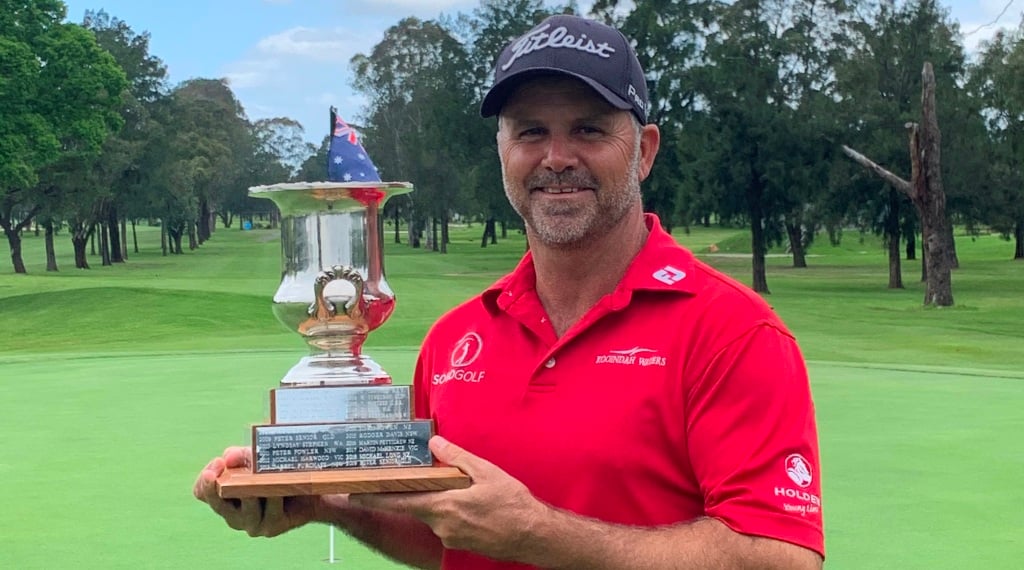 Andre Stolz has wound back the clock with a win in his first major PGA Legends Tour event in his breakout year at the 2020 Australian PGA Seniors Championship.

Playing alongside fellow Aussie legends Peter Lonard and Peter O’Malley, the 50-year-old claimed victory with a three-round total of 9-under 201, four strokes ahead of Lonard in second place at 5-under par at the Richmond Golf Course.

A spectacular second round of 6-under 64 on Friday set up a smooth run home for Stolz in the final round, but the victory did not come without both challenges and excitement.

The PGA TOUR winner pulled out all the stops to make up for two double bogeys made on holes 9 and 15 with birdies at 2, 4 13 and 18 to close out final round of even par and maintain his four shot margin.

“It was great playing with O’Malley and Lonard, they are old buddies of mine and you know they’re not going to hand it to you so it was nice being able to get on top of them,” said Stolz.

“I have been playing some great golf despite the unlucky break on 9 and maybe a wrong club on 15, but I always felt like I was in control which was good enough to keep them at bay.

“It’s been a long time. It’s interesting, normally when I play pretty good and get myself in contention like that I can sort of get the job done and I’ve done it a lot in the past but it’s been so long since I’ve won anything.”

Stolz joins West Aussie and 2018 victor Michael Long as one of a list of players to have claimed the coveted Australian PGA Seniors Championship trophy in their first year playing on the PGA Legends Tour.

After aggravating an ongoing back injury a week out from the PGA Legends Tour tournament, Peter Lonard looked in fine form around the Richmond Golf Course layout where he recorded rounds of 67, 68 and even-par 70 to finish in outright second place at 5-under 205.

Queenslander Simon Tooman took third place after closing the tournament with a 2-under par 68 for a final total of 4-under.

Former champion Peter Fowler and Peter O’Malley rounded out the top five with a tie for fourth place at 3-under the card.